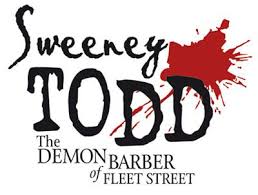 So Sweeney Todd the High School version was much better than anticipated. I must admit when I heard that there was a student edition, many things started to pop through my mind. 1) It’s going to be largely watered down 2) The orchestration will likely be reduced to the bones and also watered down 3) Material would be way beyond the reach of the majority of those involved on and offstage.
Pleasantly surprised .. Yes, there were a few songs “Ladies in their sensitivities” that were diffused. Some minor differences in keys and shortening of a few instrumental interludes.

The cast was talented and worked months to pull out what was an incredible production. The orchestra comprised a lot of students who really handled the score well. Did I mention it was about a 30 piece orchestra? It was full and sounded marvelous. Not only was this a strong production, it provided so many valuable learning opportunities for those involved.

Highly recommend doing this production if you’ve got strong talent and a lot of time. The major roles are demanding – Sweeney, Lovette, Anthony, Johanna, Judge, Pirelli, Beadle, Beggar Woman and Toby. Ensemble is sporadically spread throughout show but have exposed and challenging vocal parts.

A Christmas Carol: Ghosts of Orchestrations past.

Into the Woods – Synth beware